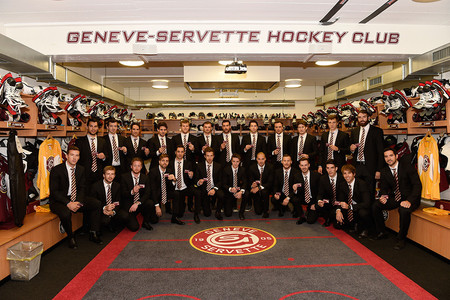 Genève-Servette Hockey Club has taken part in the Maradon event for a number of years now. The club has long been aware of the significance of raising public awareness of organ donation in our country.

Switzerland has one of the lowest rates of potential organ donors per capita. This is an appalling statistic that should be remedied. With this in mind, GSHC has decided to raise supporters’ awareness of the importance of organ donation.

Having cooperated several times with Fondation ProTransplant, GSHC has undertaken to promote organ donation, thereby joining several foundations active in this domain, as well as the University Hospital of Geneva (HUG) and the Federal Office of Public Health (OFSP).

Genève-Servette Hockey Club has taken steps with Swisstransplant and the OFSP to create an official donor’s card with the club’s colours. Every member of the club has since received the donor’s card, which was sent out with the season ticket. GSHC would obviously not ask supporters to commit to this cause without first making a move themselves. Players, coaches and GSHC staff have therefore all subscribed as potential organ donors.

This is but a first step. GSHC will not stop at sending donor’s cards to its supporters. Other campaigns will follow to show the club’s long-term commitment to this issue.

The aim is simple and obvious. Everyone should share in this effort, GSHC supporters or not, because organ donation is a matter of public concern.