Born on 5 June 1934, Fritz Naef began playing for HC Davos in the village where he grew up. He joined National League A side Grisons for the 1949/50 season, when they won their 21st national league title. By the age of 16 and a half, Naef was already part of the extended squad. 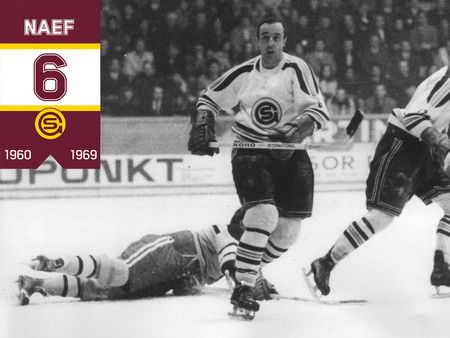 In 1954, he left the mountain region for the plains, helping Lausanne win promotion to National League A in 1957. Still at Lausanne, he finished both the 1959 and 1960 seasons as top scorer in the league. At the end of the 1959/60 season he moved to Geneva, having signed for Servette HC.

In his first season, Naef only played in friendlies and deputized as coach on several occasions, but then he became a key contributor to the success of Servette HC, then Genève-Servette Hockey Club after Servette's merger with HC Genève in 1963.

He helped GSHC win promotion to National League A in 1964, then finish four times as league runners-up between 1966 and 1969. He was also the league's top scorer on four occasions between 1965 and 1968. Fritz Naef played his final game on 15 February 1969, ending his career with a 7-3 win against HC La Chaux-de-Fonds.

Another record held jointly by Naef is that of the most goals scored in a single game: he hit the back of the net eight times in the club's 12-3 win over Neuchâtel-Sport Young Sprinters HC on 21 January 1967.

He scored 52 goals in 51 games for Switzerland, representing his country at four World Championships and at the 1956 Olympic Games in Cortina d'Ampezzo.