Born on 17 May 1944, Daniel Clerc was Genève-Servette's star goaltender from 1964 to 1974. As the team's final line of defence, he kept things simple, on and off the ice. He was incredibly calm and an excellent communicator as soon as he left the locker room, a real club player for whom club loyalty meant everything. The Lausanne-born goaltender's first club was UGS, but once he joined the garnets, he stayed in Geneva for the rest of his career. 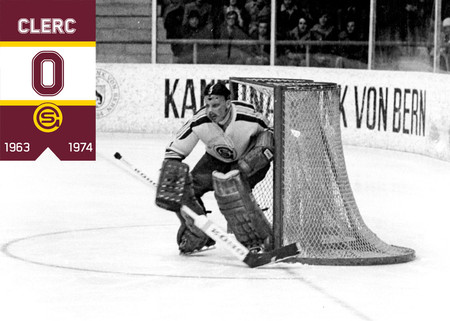 For Clerc, it all began at the schools tournament organized by the now defunct newspaper La Suisse, an event that would attract the crème de la crème of Genevan ice hockey at the time. It was almost compulsory to take part in the event if you wanted to play for UGS (later renamed Genève) or for Servette HC. Clerc joined UGS, rather than Servette, in 1963, and

after the merger he stayed at the new club until he was 30, well beyond the normal retirement age during that era, despite never winning the Swiss championship, which went to Kloten, Grasshopper and La Chaux-de-Fonds. After retiring he briefly returned during the 1974/75 season to try to save the club from relegation; his efforts were in vain.

Daniel Clerc's career is about more than just his time at UGS, Genève and Genève-Servette. He was also a loyal servant of the Swiss national team, representing his country 38 times and acting as stand-in for one of Switzerland's all-time greatest goaltenders, Gérald Rigolet. He acquired quite a collection of passport stamps, having participated in three Group B World Championships, in Vienna, Skopje and Bucharest, as well as touring Canada with Genève-Servette. He also travelled to Czechoslovakia and the USSR during the Cold War era.

Clerc was one of the heroes of the Swiss Cup winning team of 1972,  saving a penalty in the final taken by Ambrì-Piotta's former NHL star Andy Bathgate, who spent the final years of his career in the Ticino canton.