This Saturday night's game was the first time young Stéphane Charlin (17) saw his name on a Swiss League game sheet. In the absence of Christophe Bays, the goalkeeper of the elite juniors came to second place to Gauthier Descloux.

After a seductive pre-match show on the Tissot Arena side, GSHC attacked the match with the same envy as the day before against Bern. 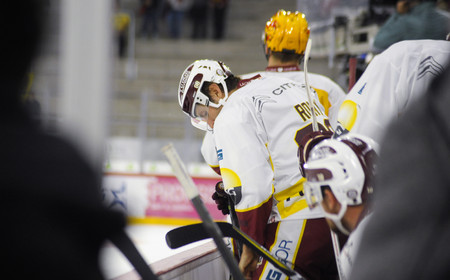 The penalty inflicted on the EHC Biel for overcrowding quickly gave GSHC the opportunity to open the score. But it's a Jonas Hiller who stood up against the Eagles. Penalties then followed suit against GSHC. Bezina, Tömmernes and Fransson took turns on the bench of infamy. Biel didn't ask for so much and could open the scoring by Robbie Earl (13th).

When Traber then joined the penalty box, we thought it would be difficult for GSHC to come back. But it is precisely by coming back on the ice that Tim Traber could score his first goal of the season to equalize! The 18th minute was then played and the score remained unchanged until the siren.

At the beginning of the median third, GSHC seemed to change into second gear. GSHC started by taking the lead in the 24th minute by Loeffel before taking two points in the 35th minute by Spaling after a superb combination in power play. GSHC is very realistic and Gauthier Descloux the author of a very good performance: during this second third, he had to divert 16 shots (against 10 for his counterpart).

It is in the third third that the match became unbelievable. Biel could quickly reduce the score and restarted the match after a deflection in front of Descloux (43rd). Deflection that the referees will have to validate in the video. Three minutes later, Micflikier was able to equalise for Biel. And while GSHC was picking up some colours, especially in power play, the EHC Biel/Bienne could put the fourth on a counter-attack! Six minutes was enough for the Biel to overturn the game.

Only 5 minutes left in the game when Almond could equalize for GSHC! And as we headed straight for extra-time, Seoul's Toni Rajala could score the fifth goal in the.... 21 seconds of term.

The EHC Biel-Bienne was therefore the winner after being on fire in the third third.

The next game for GSHC will take place on Wednesday in Sion as part of the Swiss Cup. Tickets will be on sale at the GSHC office at 6 Chemin de la Gravière on Monday, Tuesday and Wednesday mornings.