Born in Geneva on 26 May 1950, Eric Conne discovered ice hockey in October 1957 during the schools tournament organized by the newspaper La Suisse. The highly talented defenceman became the youngest player in the history of National League A on 15 January 1965, helping GSHC thrash Neuchâtel-Sports Young Sprinters HC 8-2 at the tender age of just 14 and a half! 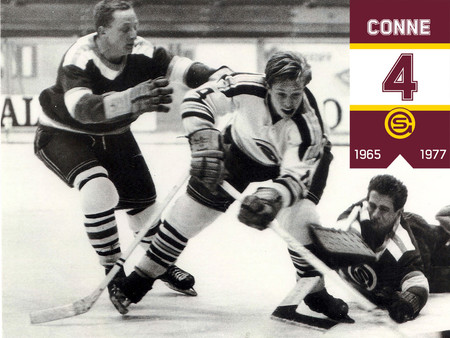 Eric Conne played during GSHC's glory years, finishing second in the Swiss championship every year between 1966 and 1969, as well as in 1971, and winning the Swiss Cup in 1972.

But the blueliner stuck around during the best of times and the worst of times. Following GSHC's relegation at the end of the 1974/75 season, he played on until 26 February 1977, the date of his swansong with the Grenat outfit. He scored a goal in his final match.

After ending his playing career, Eric Conne remained very much a part of the club. He fought on every front, first as a coach then as a director, eager to give back to GSHC what the club had given him. Conne helped GSHC through a turbulent few years, enabling young Genevans to follow in his footsteps and play ice hockey in the region.

He must have felt immense pride when, during the 1996/97 National League B season, a young man named Flavien took to the ice wearing the number 4 shirt. His son, who never saw his father play, made his National League debut for GSHC before joining National League A outfit HC Lugano.